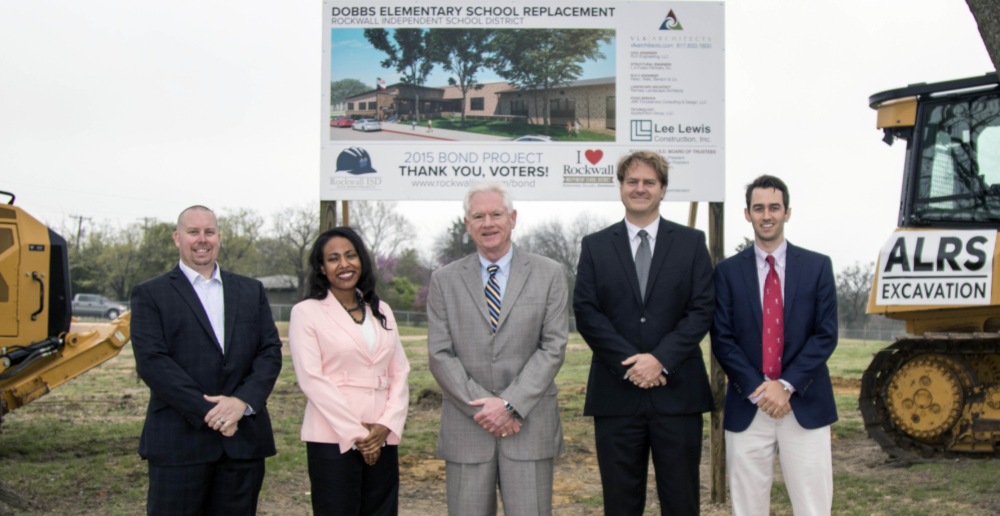 "This marks a special moment in the history of Rockwall ISD and our community," said Superintendent Dr. John Villarreal. "It is with great pride that we celebrate today's groundbreaking ceremony for our school district and community, but most importantly for the children who will walk its halls."

At the groundbreaking ceremony, 6th grade student Jackson Stewart spoke about how impactful his time at Dobbs has been.

"I know that those who have been a part of Dobbs will understand it when I say you might be able to move the school, but you can't change how it feels on the inside," said Stewart.

The new Howard Dobbs Replacement Elementary School is approximately 93,000 sf and will house grades pre-kindergarten through six. It is a product of the approved 2015 Bond Referendum, and is set to open in Fall of 2018. To honor the longstanding legacy of Dobbs that spans over three generations, the new school will feature similar flooring materials, paint colors, wall tiles, and the signature orange and black yellow jacket that is showcased in the current building. The new classroom wings will include collaboration areas, and the library will function as the heart of the school, leading out to a learning stair that will accommodate the needs of several classes.

"VLK is honored to be chosen as the architect for the Dobbs Replacement School," said VLK Principal, Richard Jaynes. "After a very intensive and rewarding design process, construction of the new school officially started Friday, March 10. It was a pleasure to work with district and campus staff to capture the Dobb's spirit in the new design that Dobbs' Principal, Ruth Johnson, calls The Dobbs Family."